"Chris wrote the bulk of the lyrics months ago, but he has given me updated lyrics as I have needed them, some as recently as last week. I have been working on rough song ideas for last few months. Some basic song structures were recorded out on the road last fall with a portable studio set up in the back lounge of the bus, and other ideas more crudely captured by the recorder in my phone. So far, all the songs written for the album have been recorded in a rough demo form. Drums have been programmed, scratch guitars have been recorded, and a lot of the vocals have been 'sketched' out.

For the last few weeks, our drummer Frank [Fontsere] has been relentlessly rehearsing the new album material at our practice space in downtown Atlanta. Next week, we officially move into the studio where we start tracking drums.

Now to the big-headed gum-bumping. Based on the songs and the early demos, my gut feeling is that when this album is completed, it will be the best overall album that I have been a part of.

It takes a lot of time and effort from so many people to make a record and then get it on to the shelves of your local music store. But all of us involved know that without the band's supporters, making these records wouldn't even be possible. So for that gift, we are so grateful, and thank you from the bottom of our hearts."
Alle Artikel zu
Nach oben

Fozzy - Do You Wanna Start A War?

Fozzy - All That Remains 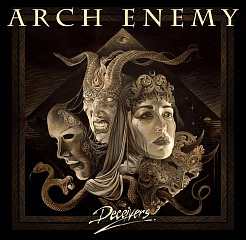